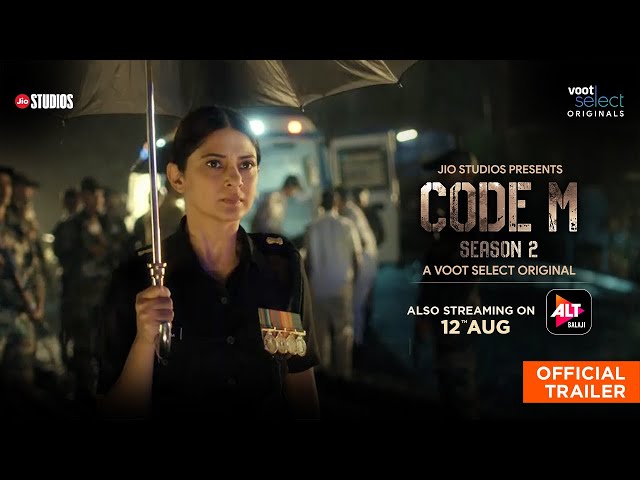 Watch all the action unfold in the thriller drama – of Code M season 2: Trailer out now!

After the phenomenal global success of the first season of Code M, the streaming platform is back with yet another rip-roaring, action-packed season of the thriller drama, Code M Season 2. ALTBalaji released the trailer for the much-loved series on Tuesday, August 9th, and it promises livewire action and drama. Code M 2 is set to build on the success of the first season with a mix of big-ticket action sequences and a heart-wrenching story.

Mounted on an epic scale, Code M 2 has Jennifer Winget reprising her role as Major Monica. The trailer also features Tanuj Virwani as Angad Sandhu. A mysterious, yet entertaining set of characters wins us over with their lively, breathtaking performance. The central theme of Code M season 2 is corruption at various levels of the system, with a vigilante team targeting corrupt individuals who were responsible for the deaths of innocent soldiers. The series, like the first season, is created by Ektaa R Kapoor.

Besides, the gripping narrative, whistle-worthy dialogues and breath-taking performances have been hugely appreciated. The show’s plot breeds curiosity with every episode and ups the excitement level as it goes on.

The second instalment of the super successful web series Code M has double the threat, double the edge, and double the risk. Fiery and intelligent, Major Monica seems to have found her biggest challenge in life.

The trailer for Code M 2 makes clear that ALTBalaji viewers can expect something really special!