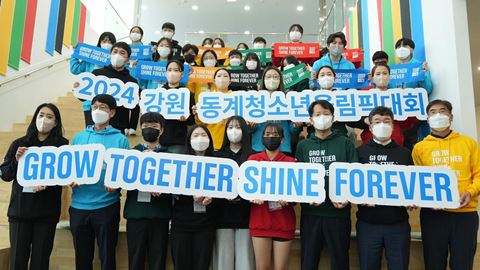 22 Sep 2022 – The Gangwon 2024 Winter Youth Olympic Games Organising Committee (YOGOC) has held an event with local youth at the PyeongChang Olympic Museum to launch the slogan “Grow Together, Shine Forever”, celebrating the 500-day countdown to Gangwon 2024.

More than 30 young people from the Games’ host cities, part of the Gangwon 2024 Promotion Group and Youth Supporters, took part in the event. They were joined by PyeongChang 2018 silver medallists in curling, Team Kim, and YOGOC Secretary General Kim Chul-Min.

The celebrations, which were meant to run on the 500-day-to-go mark earlier this month, were postponed following a typhoon alert for the region.

A variety of youth-centred activities took place throughout the day. The young participants visited the PyeongChang Olympic Museum, reminiscing about the Olympic Winter Games PyeongChang 2018 and enhancing their understanding of the Olympic spirit and winter sports. This was followed by venue tours, the unveiling of the slogan and a Q&A with Team Kim.

The activities part of the celebratory event embodied the YOGOC’s efforts to foster the active participation of young people by incorporating ideas generated by the Gangwon 2024 Youth Supporters group. One of the activities initiated by the youth group, “growth planting”, was eventually performed during the event. All of the participants gathered to plant a tree, symbolising growth, reflecting the meaning of the slogan.

“Growth planting” initiator and Gangwon 2024 Youth Supporter Sim Leo said: “It feels like the cheers and shouts that filled PyeongChang four years ago still remain here in the city. It’s an honour to see how my idea came to life. The small tree symbolises young people. I hope it will grow well for the next 500 days and eventually shine brightly in 2024.”

The Winter Youth Olympic Games (YOG) Gangwon 2024 will be held between 19 January and 1 February 2024, and will benefit from the Olympic Winter Games PyeongChang 2018 legacy by using some of the same facilities for the YOG. Some 1,900 athletes from around 81 National Olympic Committees are expected to take part.