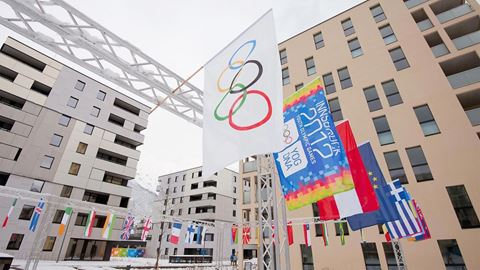 13 Jan 2022 – The first Winter Youth Olympic Games (YOG) were held 10 years ago in Innsbruck, Austria, from 13 to 22 January 2012. The legacy of these games still echoes strongly in Austria, but also inspired great efforts from subsequent hosts of this event – Lillehammer 2016 and Lausanne 2020.

The Innsbruck-Tirol Sport (ITS), a structure created immediately after the 2012 YOG, has been looking after the legacy of these Games for 10 years. In total, nearly 100 sports events, including seven major ones, have been organised for the enjoyment of 850,000 spectators, 35,000 schoolchildren and students, and more than 300 million TV viewers.  Generating more than 80 million euros in economic impact for the region, they have provided work for 180 employees supported by 230,000 volunteers.

The new Olympic Village buildings have been converted into social housing, like those built for the 1964 and 1976 Games, and the sports facilities for the YOG, such as the Nordic Centre, the ski jumps, the lighted shooting range in Seefeld, the ski-cross track, the freestyle park in Kühtai and the alpine ski slope in Patscherkofel, have since been used for major sports events.

“We have hosted some of the biggest sporting events in the world, between the Winter World Master Games 2020, a world record in terms of participation with 3,000 athletes from all over the world, and the biggest International Cycling Union (UCI) road event ever held in Austria since the 1976 Olympic Games.  We have developed the largest sports volunteering platforms in Central Europe and hosted almost 40,000 children at these events. The YOG brought Innsbruck back to the forefront of major sports events, leaving a solid base for the following years with six world championships in five years,” ITS Director Georg Spazier explains.

Lillehammer 2016: a place of excellence for the athletes

In Lillehammer in 2016, the Organising Committee focused on sustainability by reusing nine of the ten competition venues from 1994, and by encouraging alternative modes of transport and recycling. As part of the legacy, in December 2017, the Lillehammer Olympic Legacy Sports Centre (LOLSC) opened its doors, and has been welcoming and training young athletes, coaches, and leaders every year since. The Centre offers training camps and seminars for young athletes and coaches, as well as a leadership and event organiser development programme directly inspired by the YOG “Learn & Share” activities.

In 2020, 500 athletes from all over the world attended this centre of excellence while the Olympic Village served as their home. The region represents a key stage in the international sporting calendar, and the performances of Norwegian athletes are celebrated at every competition. At the 2018 Games in PyeongChang, the Austrian won a record 39 medals. The legacy of the Lillehammer Games is being passed on from generation to generation.

Lausanne 2020: a boost for the city and young people

Lausanne succeeded in hosting an event that met the recommendations of Olympic Agenda 2020: sustainable organisation with a reduced carbon footprint, a legacy for the population, an attractive event with a mass audience, and an innovative competition with diversity at its heart. In total, 640,000 spectators, including 350,000 for the sports competitions alone, attended the third winter edition of the YOG. More than 130,000 students from local schools were involved and inspired by the success of Lausanne 2020.

In the capital of the Canton of Vaud, Lausanne, the Vortex with its spiral ramp was the Olympic Village for around 1,880 athletes in 2020. Today, it serves as accommodation for more than 1,000 university students and academic guests. In the mountains, a new ski lift and a new ski run were installed in Les Diablerets. The resort of Leysin confirmed its orientation towards freestyle skiing and snowboard competitions after the complete renovation of its facilities. In Les Tuffes across the border in France, Swiss teams have free the use of the YOG Nordic skiing infrastructure. A Lausanne 2020 Foundation will also be created to focus on legacy.

Since their creation in July 2007, the Youth Olympic Games (YOG) have served as a booster for the athletes, the Olympic Movement and the cities that have had the chance to host this great sports event dedicated to young people. The next Winter YOG will be held in Gangwon in the Republic of Korea, from 19 January to 3 February 2024. This edition is currently being built on the legacy of the Olympic Winter Games PyeongChang 2018.

The YOG are for athletes aged from 15 to 18 from all over the world who are looking to achieve sporting excellence while taking onboard the Olympic values thanks to a comprehensive culture and education programme. They are also a major sports event that can leave a lasting legacy for both their host city and a whole generation of athletes.