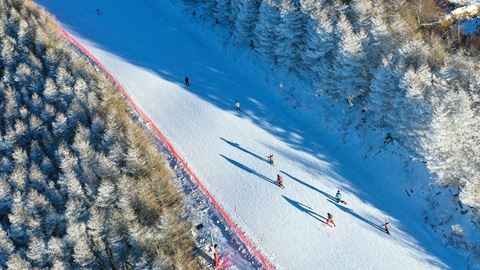 Highlights of the Report include:

Beijing 2022 has committed to staging carbon-neutral Games, and has implemented measures to reduce its carbon emissions, including low-carbon venues and transport solutions.

The estimated total baseline emissions – that were recalculated in June 2021 – covering the whole process of the Beijing 2022 Games was 1.306 million tons of carbon dioxide equivalent. Of this, the biggest contributors were venue construction, transport and spectators. The actual emissions will be recalculated after the Games.

All venues will be powered by renewable energy for the first time at the Olympic Games.

Natural CO2 refrigeration systems will be used at four Beijing 2022 ice venues – the first time this low climate impact technology will be used in China and at the Olympic Winter Games. The technology can achieve energy savings of more than 20 per cent compared with traditional refrigeration methods.

Beijing 2022 is making full use of existing venues, and prioritised sustainability while building and operating new venues.

Environmental Impact Assessments (EIAs) have been conducted for the new competition zones of Yanqing and Zhangjiakou. Wildlife has been protected through restrictions on night-time construction, the establishment of wildlife corridors, and the transplanting or protection of plants, where necessary.

All of the Beijing 2022 new and renovated venues have been certified with national sustainable construction standards that focus on energy-saving, water-saving and materials-saving measures adopted in venue design and construction.

In the 2020–2021 season, the number of people engaged in snow and ice sports – be it professionally or as athletes at elite or grassroots level – reached 230 million. The income of ice and snow tourism exceeded RMB 390 billion, according to the Report.

All three Beijing 2022 competition zones – Beijing, Yanqing, and Zhangjiakou – have benefited from the preparations for the Games, which are helping to reduce inequalities between rural and urban areas, boosting the local economy and improving local livelihoods.

Hosting the Games has accelerated the development of the Beijing-Zhangjiakou high-speed railway, reducing the travel time between Beijing and Zhangjiakou from three hours to 48 minutes.

Zhangjiakou looks set to become China’s largest ski resort, able to handle 63,700 people per hour. New businesses make and sell ski gear and exercise equipment, while a bed and breakfast sector has emerged. Zhangjiakou has also benefitted from infrastructure upgrades, including new railway tracks, roads and passenger transport hubs. In 2019, it received more than 86 million tourists and revenue of over RMB 100 million, up by over 20 per cent on the previous year.

In Yanqing, preparation for the Games drove a 35.2 per cent growth in disposable income per capita between 2015 and 2019. And, linked to the replacement of coal-fired boilers with the use of natural gas and solar energy, air pollution has improved, with PM2.5 levels dropping 49.2 percent. The Games have also accelerated Yanqing’s development of new roads and railway connections, as well as a hydrogen industry park. Yanqing is on its way to becoming an all-year tourist destination, offering opportunities for fishing, rock climbing, camping, hiking and multiple cultural activities.

And in Beijing, an innovative Beijing Olympic Winter Games park, which hosts Beijing 2022 offices, was created by utilising discarded factories in the Shougang industrial park. It has become a vibrant community where people now live, work and play.

Beijing 2022 is also helping improve the health of Chinese citizens. Some 37.2 per cent were regularly taking exercise in 2020, which is a 3.3 per cent increase compared to 2014.

The Beijing 2022 Pre-Games Sustainability Report can be accessed here.